The influence of digitalization on people and society has become so gigantic that we are talking about a massive digital change of society. Every person, rich or poor, every organization, every country, is profoundly affected by digitalization. Thousands of companies are going through digital transformation processes, to adjust their business model to the digital world in which you can only keep up if you operate internationally, through the Internet. No one can do without a smartphone and internet anymore. Social media have a major impact on everyone’s life, including politics and elections.

Humanity is therefore moving towards a new phase of its existence. Towards a world where digital communication and systems have primacy over human thought and action. In which human compassion, rather than national borders, is the determining factor. In which people can find each other worldwide, regardless of origin, in their common love or interest for art, science, doing business, nature, helping other people or transfer of knowledge. And where like-minded people can easily find each other through digital tools. We call this the fluid society. Because people no longer think and act primarily on the basis of the place where they happen to live or were born, or the culture in which they grew up, but primarily on the basis of their own wishes for the fulfilment of their lives and how to give shape to these wishes together with others, wherever they may be. 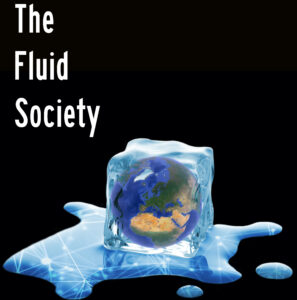 The term fluid society comes from the comparison with melting ice cubes. Whereas until recently people were locked up in their country and culture and only a small elite of scientists, businessmen and the rich could afford to look wider and have a vision of the world, in short, where the world used to be a place where people were locked up in the “ice cube” of their own environment, the digital world suddenly offers the prospect of global communication and connectedness for everyone. Humanity and all people can become digitally mobile through the internet and social media, but also physically mobile, because it is increasingly becoming easier to move to other places that offer more perspective. From a world divided into rigid competing cubes, the world is shifting to one large hyperconnected networked entity, which is currently in full development. A world that can be called fluid, because connections between people and organizations are increasingly determined by mutual affinity, interest, help or work, rather than by origin or ethnicity. As a result of digitalization, the world will start to organize itself differently, a process that has only just begun but will crystallize in the coming decades.

Digitalization will continue. The fluid society is not so much an idealistic world view, or a political ideal, as a term for a different kind of society that is irrevocably coming into being as a result of ongoing digitalization. After all, the digital world is international by nature and connects where there used to be no connections. Whether politicians like it or not, the digitalization, globalizing world will continue, nobody can stop it, but it requires direction.. Politics that used to be primarily national must internationalize, in order. to resolve the many issues that exist. Digitalization offers incredible perspectives to finally arrive at a more just world with a just distribution of knowledge , good education and good healthcare for all. However, digitalization also unleashes negative forces like cybercrime, or too much power for tech giants. Things that threaten to make the world lose its grip.

Other governance required. In short, the digital world increasingly demands control, to curb the negative aspects and allow the positive ones to flourish. How do we rein in cybercriminals, who operate worldwide? How do we prevent superpowers from ending up in a technological or digital race or a struggle for hegemony? How do we curb the power of tech giants? On the other hand, how can the tech giants, perhaps as digital utilities, contribute to a better distribution of wealth worldwide? How can we make education, health care, knowledge, spread better to everyone, so that a more equal playing field will emerge? How are we going to govern the digitizing world now that classical laws and nation-states seem incapable of governing the digital world in a stable way?

Soon the book “The Fluid Society or the Digital Challenge for Europe” will be published, containing a large amount of information and ideas about the fluid society that is unfolding. Besides analyzing the effects of digitalization on people and humanity, the book also addresses the major issues that governments are now struggling with as a result of digitalization effects. Which forms of governance could possibly offer a solution to master the many issues that are nowat stake? Europe has been chosen as the starting point. First of all, because the author is most familiar with it. But also because Europe is already taking a number of important initiatives in the field of digital legislation. Nevertheless, Europe is still very much behind large countries such as the US and China. This book makes numerous suggestions to strengthen the European digital position in the years to come. This is badly needed for the future prosperity of Europeans and for Europe’s position in the world.

Books about The Fluid Society. The first book about this theme was published only in Dutch in the Netherlands: “De Vloeibare Samenleving”. ISBN: 9789492221742   Order? Go to  futurouitgevers  or order at managementboek.nl , bol.com or 1boek

My second book, December 2020, is called: “A plea to think differently in the digital world”. It is a collection of columns from this website about the digital influence on society. Where I conclude that we have to look differently at the new digital reality in order for humanity to survive in a sensible way. The book is available from: Apple Books, Google Books, Kindle and Kobo.

Peter Hagedoorn is trained as a physics engineer and has followed a career in which he has worked alternately for the public sector and business. He worked for Shell, the Ministry of Economic Affairs, Bull-Netherlands, RAET, Hagemeyer and Océ. He was Director of the Millennium Platform. He was the founder and first chairman of the CIO-Platform Nederland, in which capacity he was also on the Board of the European CIO Association. He was later appointed Secretary General of this organization.

Do you have any questions, suggestions or would you like to respond to a topic? Do not hesitate and send me an email: peter@hagedoorn.org

Reproduction of articles (or parts of articles) is only allowed with the permission of the author. Please contact: peter@hagedoorn.org